Norwest’s Marymia East Project (84%) is a joint venture with Riedel Resources Limited (16%) and comprises two granted exploration tenements covering a total area of 230 square kilometres. The project is situated 40 kilometres east of the Plutonic Gold Mine, 20 kilometres southeast of Vango Mining’s Marymia gold camp, and 55 kilometres northeast of Sandfire Resources NL’s DeGrussa copper mine. Marymia East is bisected by the Jenkins fault – a regional structure associated with several base metal deposits including the DeGrussa copper-gold operation to the southwest.

Norwest announced results of its 6,000-metre aircore drilling programme in August 2021 which targeted areas prospective for gold & base metals and includes:

Gold at Area 2 within 400m gold zone including:

In early 2022 Norwest undertook a comprehensive review of the historical geological database. It was noted that large areas tested by surface sampling and shallow RAB drilling may have been misinterpreted due to a deep silcrete cap ‘masking’ much of the potential gold & base metal anomalism. In Q2 2022 Norwest will retest several anomalous zones by aircore drilingl to blade refusal across several gold & base metal targets.

Norwest will aircore drill four targets to blade refusal and run multi-element analysis on the composite samples. These targets, NWM-1 to NWM-4 are shown on the map below.

Aircore drilling at NWM-1 & NWM-2 will target gold & base metals near the Jenkins fault – a regional structure associated with several base metal projects including the DeGrussa copper-gold project ~75kms to the southwest.

Aircore drilling will target 1) Cu-Pb anomalism at the Baumgarten area (NWM-3) where past RAB drilling tested only for gold and 2) to the south  (NWM-4) where shallow RAB drilling returned 589 ppm Cu & 1130 ppm Pb. 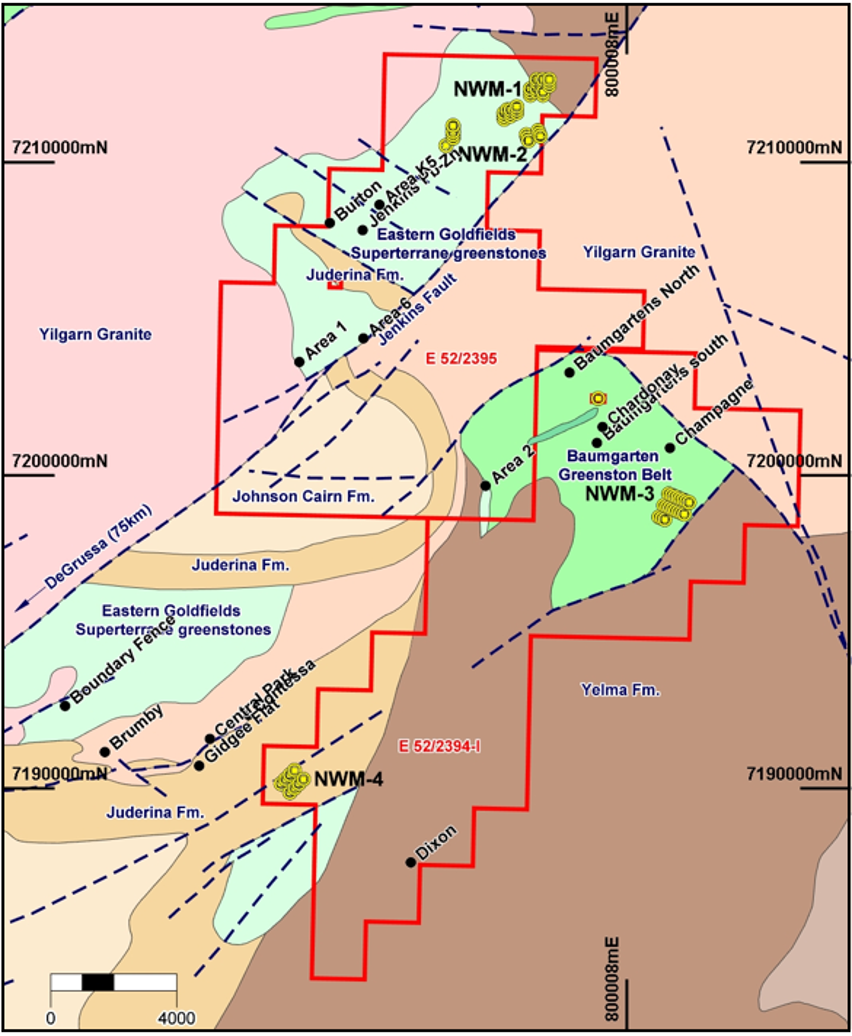